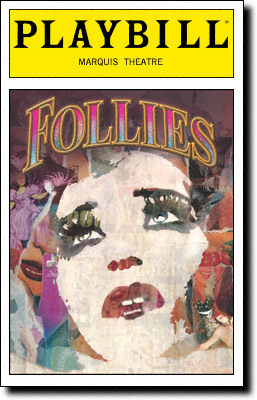 There is something magical about Stephen Sondheim’s musicals.  And Follies, playing a limited run at Marquis theatre was no exception.   I went because I am a huge fan of Bernadette Peters.   Having seen her in A Little Night Music, I couldn’t wait for the opportunity to see her again.

But beyond just hearing Peters sing, I also experienced a wonderful production with a story centering on how our past affects not only our present but our future.  The stories of Sally and Buddy and Phyllis and Benjamin serve as the center of a delicious confections that includes one of the best

groups of supporting actors I’ve seen gathered for a single performance.  Every number was an absolute delight.

Peters frazzled Sally was the perfect foil to Kirsten Scott’s elegant (and repressed) Phyllis.  Peters first act number (a wild combination of truth and lies) In Buddy’s Eyes was flawlessly performed with her trademark ability to transcend the music and communicate instead the emotion at the heart of it.   Scott’s Could I leave You in Act 2 had similar power and in many ways was one of the strongest moments in the musical.

However, the showstopper, and I mean that in a literal sense, was Who’s that Woman, a company number lead by Terri White.   If you see this woman’s name in anything… GO.  She’s fantastic.  I’ve heard of showstoppers my entire life.  Can even reel off a number of the ones that were exactly that in their day.  But I’ve never been present for one.  And it was truly a treat.   Ms. White was amazing and held the audience in the palm of her hand.  Other members of the cast were equally delicious, including Elaine Paige, playing Carlotta and slaying the crowd, as well as Jayne Houdyshell and Mary Beth Peil.

Although the younger cast was also superb, the old gals had them in spades.  And I can’t

remember a musical where I’ve so looked forward to the next number.

And beyond the music, the staging itself was truly magnificent.  The shades of the women as young girls (the play is set in the crumbling ruins of what was once a theatre housing the Follies—and the reunion on the eve of its destruction of many of the former

performers, including Sally and Phyllis) that still haunt the theatre are beguiling and spellbinding and when they become shadows of their older selves as in Who’s that Woman, it is sheer magic.

All in all a wonderful night at the theatre.   Unfortunately, Follies closed its limited run on January 22, but if there’s a cast album…buy it! 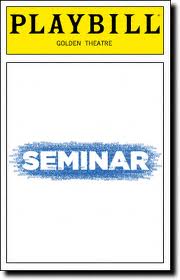 Okay first I have to say that I have loved Alan Rickman since the first time I saw him in Truly, Madly, Deeply.  And he’s only gotten better and better and better.  So the chance to see him on Broadway was a dream come true.  Second off, my husband also loves Alan Rickman, but still managed to forget that we were going to the theatre, so I wound up seeing the play without him (but with my daughter which was every bit as wonderful).

And the play (as well as the man) did not disappoint.  In fact, unlike several star turns I’ve seen of late, I was impressed

with the quality of the entire cast.  Comprised of only five people it was great fun to watch four of them spar with each other as Rickman served as instigator.  Particularly wonderful was Lily Rabe, whose character pulls the audience right into the class with her.   I’d seen Rabe (who is Jill Clayburgh’s daughter) in Steel Magnolias a few years back and was delighted to have the chance to see her again, but her performance definitely outshone any preconceived notions I might have had.  She’s a delight.

Hamish Linklater who’s pivotal role is understated throughout was no less enjoyable to watch.  He was so believable as a writer and student, I almost forgot at one point that I was watching a play.  He superbly embodied both the of the fragility of writers and the idealism of students.  Supporting characters played by Jerry O’Connell and Hettienne Park were also excellent and rounded out the cast nicely.

But the center of the piece obviously was Rickman.  He has aged gracefully (as I fear I perhaps have not) and still has that magical voice that rivets you to your seat even when he’s speaking expletives.   The dichotomy of his character was well written and even better acted.  And I so enjoyed every minute he spent on the stage.  Although I’ll admit to one moment where I broke from the play wanting him to say “Potter” just once.

(Rickman).  It is by turns hilariously funny, vicious, sexy, witty and poignant.  The story and its characters weave to a bittersweet conclusion that leaves the audience satisfied but still thinking.

Well-acted and well written, I highly recommend it.  I may have gone to see Alan Rickman, but I came away loving the play. 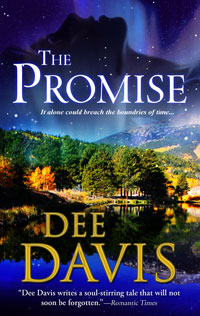 I’m happy to annouce that the last book in my time-travel trilogy, prism winner The Promise, has now been re-issued in digital format at Amazon, Barnes and Noble, and Smashwords!

The mine called to Cara from deep in the San Juan Mountains, near the town of Silverthread.    Surrounded by a murderous tapestry of lies, it had once been rich in ore, overflowing with wealth that could make a family’s fortune—or destroy it.  But also in its labyrinthine tunnels lay the path to redemption and love, a magic that could draw a woman one hundred years into the past, into the arms of one who could make her life whole.

But crossing time was just the beginning.  To right wrongs already done, to paint a new future, one brighter and full of love, Cara would have to unravel the mine’s mysteries.  She would have to depend upon the rugged man who emerged from its opening and trust his vow to keep her safe and cherish her forever.  Then, and only then, would she truly understand the danger—and the power—of the promise.

And don’t forget the other two books in the trilogy:  Everything In Its Time and Wild Highland Rose