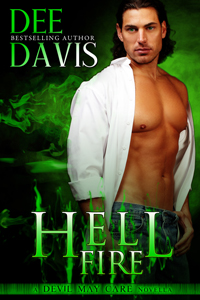 I’m excited to announce the release of Book 2 of the Devil May Care Series: Hell Fire.

They were the baddest of the bad, the illegitimate sons and daughters of  Satan, who had managed to make love, raise hell, and milk life in a manner worthy of their heritage. Until the day the devil himself needs to name his heir apparent.  So who will the next ruler of Sin City be?

Marcus Diablo is the third son of Satan.  Starting his immortal life as El Diablo, a black-hearted pirate to rival them all, he prefers living on the edge.   But modern day life has been a bit dull, so when Daddy Dearest pops in with the news that the Keys to Hell are up for grabs, he accepts his father’s quest.   Bring back the Devil’s Delight and the entire underworld is his — lock, stock and fiery brimstone.

Celeste Abbot has spent her life helping her father amass an exquisite private collection of some of the world’s most sought after items.  Traveling around the world, jockeying for position with other treasure hunters, she’s fought for and won things that many people aren’t even convinced existed.  But one treasure has remained elusive.   A perfect ruby known as the Devil’s Delight.

Only one thing stands in her way.  A green-eyed blast from her past who also seeks the stone, and will stop at nothing to get it.  And to make matters worse, the devilish man once stole her heart.  As Celeste and Marcus are thrown together again, the forces of good and evil collide in an all out battle of the sexes.  Because when a devil meets and angel—all hell breaks loose.

Just to tempt you a little bit, here’s an excerpt:

“Looking for something?”   The lazy heat of his voice twined around Celeste Abbot like a cat or a lover, probably a bit of both.

“I should have known.”   She turned the flashlight toward the sound of the voice, almost expecting to find it empty.  The man was a shadow.  “How long have you been here?”

“So why wait for me?”  She knew the answer, but she wanted to hear him say it.  Or deny it.

“You mean my father’s help.”

There was an insult in there, she was certain of it, but somehow he had a way of sugar coating the knife.   But at least he was being honest with her.  Unlike the last time.  “Let me have the journal.”  She held out her hand, her gaze locking with his.

“I hardly think that’s likely.  After all, the last time we were together, you didn’t exactly wait around for me.”

The last time they were together was a moment she tried very hard not to dwell on.  “What was I supposed to do?  Hand the Degas over to you on a silver platter?  You seduced me in the hopes that I’d tell you where it was.”

“I seduced you because I wanted to.”  Somehow they’d shifted positions, standing only inches apart.  “The Degas was a bonus.   Besides, seduction is a two way street.”

“A lane and a boulevard, maybe.  They’re hardly the same thing.”   They were breathing in tandem now.  She could see the muscles in his chest bunch with each inhalation.

“But a perfect fit, no?”   His teeth were white in the shadows.

She shook her head, fighting for clarity.  He was doing it again.  Seducing her.  And she’d sworn never to let that happen again.   Once had been enough.

Okay maybe that part was a lie.  But wonderful things could still be dangerous.

“I want the journal.   It’s my father’s life work to find the Devil’s Delight.  You know that.  This isn’t the same as a painting or a statue.”

“It’s his heart’s desire.  Yes, I know.”  His frown held a hint of disapproval.   “Unfortunately, I have a client who desires it as well.”

“And your client trumps my father?”   She inched forward, still holding his gaze.

“In this case,” his expression changed, his face hardening like one of the marbles he so often procured, “yes.   My client trumps everyone.”

“I don’t think so.”  With lightening speed honed from years of practice, she grabbed the journal and pivoted to run, her emotions tumbling between regret and elation.   To her credit, she made it as far as the sacristy door.

“Going somewhere?”  His body pinned hers to the wall, every hard muscle pressing into her flesh with the searing precision of a carved relief, two halves that were ordained to fit together.

“Let me go.”  She started to struggle, then stopped, the motion causing far more damage to her senses than simply holding still.

“Why?”  His smile was crooked.  “This is much more fun.”  He dipped his head, his lips brushing against hers.   It was meant as a tease, but something in his touch ignited a fire inside her, and without thinking she responded, letting passion carry her away, his remembered smell and taste combining into a potent aphrodisiac.

There’d never been anything wrong with his kisses, each thrust and stroke calculated to bring pleasure.

The word rang through her head.  Gathering her wits, she pushed back, but she was too late.  He’d already retrieved the journal.   “You son of a bitch.”  She swung her hand, intent on knocking the smirk from his face, but he caught her wrist, still smiling.

“Come on, Celeste,” he said, holding her firmly now, “no name calling.  It isn’t ladylike.”

“Well, I’m not a lady,” she responded, immediately regretting her words when she saw the glint in his eye.

“Believe me,” he leaned closer, his breath warm on her cheek, “I’m more than aware of that fact.” 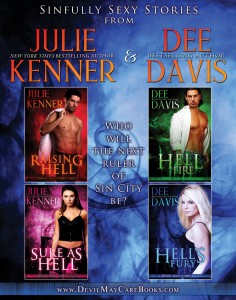 Book Three: SURE AS HELL  by Julie Kenner (out April 28th)

Book Four: HELL’S FURY  by Dee Davis (out May 5th)

Excerpt from Hell Fire by Dee Davis, Copyright © by Dee Davis. All rights reserved. Reprint only with permission from author.

They were the baddest of the bad, the illegitimate sons and daughters of Satan, who had managed to make love, raise hell, and milk life in a manner worthy of their heritage. Until the day the devil himself needs to name his heir…

The mission? Each sibling must complete a task that is designed to stretch him or her to the limit.  The prize?  The Keys To Hell.  The problem?  Four mortals equally determined to ensure that the the Devil’s children fail…

So who will the next ruler of Sin City be?

Starting next week (April 14) and continuing each of the next four weeks, I’m happy to announce that Julie Kenner and I will be releasing our Devil May Care Series.   Beginning with Book 1, Raising Hell!   Check www.devilmaycarebooks.com  for buy links starting Monday!

To whet your appetite, here’s a teaser from Julie Kenner’s Raising Hell:

Lila fidgeted on her stool, unnerved by how much she’d revealed to this man. He probably thought she was an idiot, the way she’d blathered on and on. There was something about him, though. Something that drew her in and, apparently, affected her as potently as a few strong drinks.

Lord knew, he loosened her tongue. Not to mention that his mere proximity left her feeling warm and decadent. Itchy, even, but in a wholly sensual way. Like she might die if he didn’t scratch the itch… and she might melt if he did.

“So will you?” she asked, shaking off the languor in her bones. “Will you sketch me now?”

He leaned back, his silver-gray eyes examining her with an almost feral intensity as he looked her up, then down. She tried to sit still, but couldn’t quite manage. The heat of his gaze was so intense it might have been a caress, and her nipples peaked under his scrutiny, raising hard nubs under the soft Lycra of her top. Instinctively, she started to cross her arms over her chest, but fought the urge, keeping them at her sides, and feeling more exposed—and more turned on—than she ever had in her life.

His inspection finished, he met her eyes, the corner of his mouth curving up into a silent smile. He turned away, saying nothing, then took a quick sip of his scotch. He reached for two cocktail napkins, pulled them close, then patted his mouth with one.

Honestly, she wanted to scream. “Well?” she demanded, forcing her voice to remain calm and steady.

“Of course I’ll sketch you,” he said. He met her eyes, and a muscle twitched in his jaw. “In fact, at the moment I can think of only one thing I’d like to do more.” 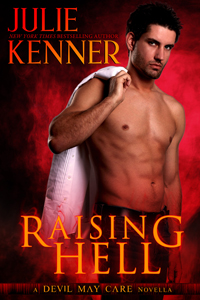 “Oh.” She knew she shouldn’t ask, but she couldn’t help herself. “What’s that?”

One beat, then another. Her heart pounded in her chest, the rhythm so intense she was certain everyone in the bar could hear it.

And then, just when she was certain he wasn’t going to answer, he traced the curve of her cheekbone with his thumb, then leaned close. She closed her eyes as his lips brushed her hair, and his voice was a whisper against her ear, sending shivers trilling down her spine. “The only thing I want more than to sketch you,” he murmured, “is to paint you.”

And then, opening her eyes to look at him, she nodded.

He grinned and reached into the inside pocket of his jacket to produce a stick of charcoal.

She lifted an eyebrow and he shrugged. “Accountants carry calculators,” he said. “It’s not that surprising.”

He drew the napkin closer. “No need. Now sit quietly,” he directed. “And watch me.”

He cupped her face, tilting her head just slightly, then urged her hand up until she found herself resting her chin on her fist, watching him from this posed position. And watching the image of herself come to life on the tiny cocktail napkin.

He started with a sweep of the charcoal. One line that seemed to have no connection to her at all. No connection, that is, except for the smoldering way that he looked at her. A smoky gaze that seemed reflected in the smudged charcoal image emerging on the paper.

The curve of her jaw. Then the line of her neck. A flick of his wrist and the tendrils of her hair seemed to materialize from so many lines on the paper. And then, most miraculously of all, he caught the expression in her eyes. And, seeing that, she knew that he could never doubt that she’d agree to be painted. Because her expression was rapturous. And she knew the truth of what he’d sketched. Because with every piercing look—with every sure stroke of the charcoal—Lila realized that she couldn’t walk away without letting him paint her. His scrutiny made her feel both alive and unique. And even if she never did another bit of modeling, the portrait he’d create would fulfill her fantasies. More, Nicholas Velnias would be giving her the chance at immortality. And, really, what girl could say no to that?