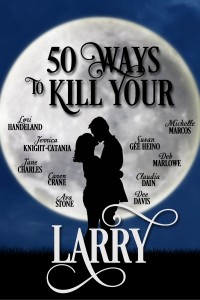 I’m happy to announce the release of Red Door Reads 50 Ways to Kill Your Larry!  Ten new short stories from ten fabulous Red Door authors.  In each story, the author finds a way to kill her Larry, whether it’s in the depths of Germany’s Black Forest during WW2, Regency England or any of today’s most exciting locations–from Caribbean beaches to a Connecticut college, New York City, Florida, North Carolina and more. There is something for every reader–historical, suspense, contemporary and paranormal.

Join us to discover Fifty Ways to Kill Your Larry…Or at least ten.

Find the weapons of doom hidden on each author’s website (listed below) then fill in their location at Contest Entry Central on reddoorreads.com

A winner will be chosen at random from the entries to win this fabulous coffin box full of deadly goodies.

The contest runs from Release Day—Tax Day!—to April 30.  So get your trigger finger ready!

Where to look for the deadly icons on each of these featured authors’ pages:

Dee Davis (looking for mine?  It’s always about the Endgame!) 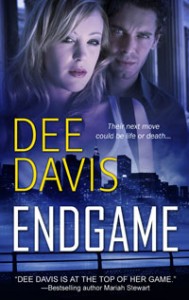 They both know the games killers play…

FBI criminal profiler Madison Harper understands dangerous minds. Tough, tenacious, with nerves of steel, she’s the best of the best. So is her new partner, Gabriel Roarke, a crack CIA operative who likes to do things his way. When the two are forced to jointly head up a task force investigating murder in high places – it’s no surprise that sparks begin to fly.

As they race through a shadow world of power, politics and deadly secrets, the passion that simmers between Madison and Gabriel soon ignites. But a clever killer at the top of his game has challenged Madison to play to the very end. Now all she can trust is her instincts—and Gabriel, the one man reckless enough to keep her alive…

Great news! For the next week (April 13-17) the first book in my Last Chance Series, ENDGAME, will be on sale for 99 cents!!

“Madison Harper?” The voice was deep, almost a bass, the sound sending a wave of something akin to pleasure coursing down her spine. She swung around, her eyes locking with pale blue eyes in the midst of a hard, chiseled face.

The eyes narrowed as the man with the voice let his gaze travel from her head to her feet then back again, the look measuring, weighing her worth. Black hair curled around his temples, a couple days worth of beard decorating his chin. He should have looked unkempt, but instead looked rakish, the glint in his eyes letting her know he was more than aware of his effect on the fairer sex.

“Gabriel Roarke,” he said, leaning against the door frame, crossing his arms over his chest, his mouth quirking upward ever so slightly.

She opened her mouth to say something pithy, but couldn’t get the words past the cotton in her throat. Gabriel Roarke was anything but average. Seven years in the Bureau, five of them working with Investigative Support meant that she could be pretty certain her reaction was well hidden. But the very fact that she was having it at all, didn’t sit well.

The last thing she needed was a pretty boy with attitude. “I wasn’t expecting you until this afternoon.” She carefully modulated her voice, keeping it neutral, almost bland. She’d used the exact tone on reticent offenders with great effect.

Gabriel’s left eyebrow rose, the resulting expression somewhere between amused and demonic. “I caught a ride on a cargo plane out of Tyndall.”

“There was no need to rush over. You could have at least waited until you’d had a shower.” It was her turn to measure him, and she had to admit there was nothing a good haircut and a shave wouldn’t fix.

His lips parted in a smile, his teeth white against the beard, making her think of a pirate. “I’ve been here since yesterday evening, and if you’d care to check,” he languidly lifted an arm, resting it on the doorframe, “I think you’ll find I’ve showered.”

Their eyes locked, the air hanging between them, heavy as if it were laced with cyanide. One breath and …

Behind her, Harrison cleared his throat.

She exhaled and turned gratefully toward her friend. “I’d like you to meet a colleague, Harrison Blake. He’s an expert with a computer, and I’ve asked him to join us. I hope you don’t mind?” She smiled, knowing full well the gesture was empty. There was just something off-putting about Gabriel Roarke. As if he kept the world at arm’s length, totally self-contained. A man of mystery.

Which simply meant he was a challenge. After all cracking personalities was her specialty. The darker the better. And if she could successfully profile someone like the Sinatra killer, she could surely deal with a CIA operative — no matter his baggage…

Excerpt from ENDGAME by Dee Davis, Copyright 2005 by Dee Davis. All rights reserved. Reprint only with permission from author.