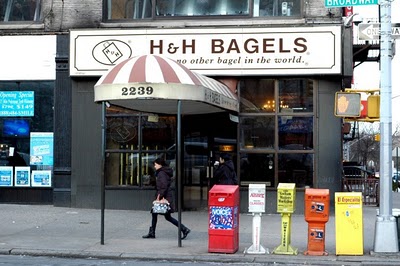 Being in Manhattan there are loads of things to do on a Saturday morning. Not the least of them being to grab a bagel and a schmear and nosh while reading the Sunday Times (half of which is delivered on Saturday—go figure).  Which means that many New Yorkers  (especially those on the West Side) are going to be crying into their lattes with the announcement that the West Side location of H&H Bagels is closing.  It’s the end of an era.

Started in 1972 by brothers-in-law Helmer Toro and Hector Hernandez when they bought an existing bagel shop on Broadway, H&H has come to represent the quintessential bagel.  Warm and chewy on the outside.  Airy, moist and soft on the inside.  In the early 1990’s the bakery moved to 45th and 12th Ave, but the main store remained the on the Upper West Side near Zabars.

When I first came to Manhattan I was told that I absolutely had to try H&H bagels.  So we

dutifully took the subway over to the West Side to partake of the magic.  And I have to say they were some fabulous bagels (although you have to take them home if you want them toasted with toppings.).   But being somewhat allergic to long subway commutes , I looked them up online and lo and behold there was an east side outlet.

Off I went to 2nd Ave and 80th, and blissfully bought bagels for the entire time I lived on the Upper East Side.  It was only much later that I was informed that while that location of H&H bagels had originally been owned by the two H’s.  They’d been bought by someone else in the eighties when the original filed for bankruptcy.  (Later indicted for tax evasion, one can’t be all that surprised).  Anyway, my H&H wasn’t actually the H&H.  However, Manhattanites live in their neighborhoods, so I ignored the lack of legitimacy—as far as I was concerned my H&H had great bagels.

But when we moved to Midtown it was no longer worth the commute.  So these days I get my bagels from a shop on the block.  And even though the place next door purports to sell H&H bagels (the bakery at 45th is still open)—I find I like my bagels local—really local (like I can smell them baking late at night when my kitchen window is open).  So while the Upper West Side may have indeed suffered a blow.  Life goes on here in Midtown.  And I’ll take my bagels—toasted with butter—just round the corner, for a perfect Saturday morning.