As you already know, I saw Seminar with my daughter when Alan Rickman was in the play.  And it was fabulous.   But, as you probably also know, my husband did not make the performance and so he still very much wanted to see it.   To that end when Rickman left and Jeff Goldblum—who I also love—joined the cast, it seemed like the perfect way for me to see it again, this time with my husband and mother in tow.

I’m not big on revisiting something I like.  Especially if there have been major cast changes.  And in this case not only was Alan Rickman gone, but also the actors playing Kate and Martin, both of whom I thought were excellent—particularly Lily Rabe as Kate.  In the new version, the role of Martin had been taken over by Justin Long (yes, Mac guy) and Kate was played by understudy Christina Pumariega.   I’ll also admit that I always hate seeing that little slip of paper in the Playbill saying that a major cast member won’t be performing.

But in this case—all my worries were for naught.  Jeff Goldblum was wonderful.  A 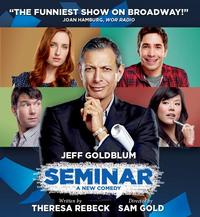 completely different interpretation of the role from Rickman’s.  And I have to say I thought a better one.  Definitely funnier.  And wonderfully off-beat.  Somehow this Leonard made more sense in the context of the story.  Rickman played him as tortured and somewhat cruel. Enigmatic which was by no means a mistake.  He was excellent in the role.  But Goldblum’s slightly jaded, definitely off kilter Leonard was more vulnerable somehow, and I actually could see him taking the journey revealed to become the man he was more so than I did with Rickman’s version.

And Justin Long was absolutely wonderful.  While I thought Hamish Linklater was strong in the role, Long was so much better.  There were more layers to the performance.  And his physicality playing against Goldblum was superb.  Maybe it was just the two of them together.  But I was totally impressed.  (As I have been in his movie appearances, particularly the last Die Hard.)  He also walked a tightrope between repression and vulnerability.  And he almost perfectly captured the obtuse reactions of a man missing the woman standing right in front of him—until it was too late.

Lily Rabe, the first Kate was absolutely pitch perfect.  I’ve enjoyed her in several Broadway performances and think she’s definitely an actress to watch.  Christina Pumariega, as an understudy (replacing Zoe Lister-Jones), was someone you wanted to cheer for.  I mean, who doesn’t love the underdog.  And she didn’t disappoint.  While her performance didn’t have the complexity of Lily Rabe’s, it was spot on perfect with comedic timing.  And if you’d missed the little white slip of paper, you’d never have known she was the understudy.

All in all, I actually enjoyed this performance more than the first. Both Jerry O’Connell and Hettienne Park were still playing the same roles from the original cast.  And as is often the case, they had settled into their roles nicely.  Hettienne still hitting the perfect notes for her character Izzy and O’Connell seeming more relaxed and natural in the role.  I appreciated his character much more this time. Whether it was his acting or the shift in the tone due to Goldblum’s interpretation, I can’t say.  But I highly recommend it.

Theresa Rebeck, who brought us SMASH for NBC, has written a poignant, funny story about writers and their fears both real and imagined.  It’s worth an evening at the theatre.  In my case—twice.