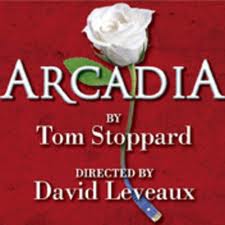 So our latest venture on the boards involved the Ethel Barrymore Theatre, home to among others, A Streetcar Named Desire and an Ideal Husband, and Tom Stoppard’s Arcadia.  I confess that we probably wouldn’t have seen the play at all if it hadn’t been for a friend who raved about it.  And am I ever glad she did.

Two stories in one, Arcadia is a masterpiece in storytelling.  “In  April 1809, … a gifted pupil, proposes a startling theory well beyond her comprehension.  Two hundred years later, two academic adversaries are piecing together puzzling clues, curiously recalling those events of 1809.”  Now first off, as

indicated by my three time travel novels, I’m a sucker for stories spanning time.  And this one is so beautifully done that at times it literally took my breath away.

The play first opened in London in 1993 directed by Trevor Nunn.   This outing the director is David Leveaux, a five-time tony nominee, including Fiddler in the Roof and Nine.  And he does a superb job, the choreography of past and present ever growing closer as the two stories intertwine.

Bel Powley and Tom Riley are especially wonderful as the gifted student Thomasina and her tutor Septimus.  Septimus in particular captured my heart, with his seemingly stoic take on life and the simmering heat just below the surface.  And his pivotal role in the drama/comedy is the lynch pin that holds everything together.  A lesser actor than Riley would have been a disappointment.    Margaret Colin (who for me will always be Jeff Goldblum’s girlfriend in Independence Day) was solid as Thomasina’s mother.  And the rest of the seventeenth century players provided pertinent background characters.

In the present day (1993 actually), the two battling historians played by Billy Crudup

(immortalized for me in Big Fish) and Lia Williams also performed admirably.  Crudup as a blustering overly zealous academic was a delight.  And Lia as a woman looking for her next story rang true for me as a writer.  And playing off of each other they were wonderful.  But the real highlight of the modern day cast was the amazing Raul Esparza (whom I discovered last year in Mamet’s Speed the Plow).  Playing an aristocratic math geek he was so good you almost wanted to hear the lines again.  And in a wonderful surprise, I was treated to Meryl Streep’s daughter Grace Gummer, whose older sister Mamie I fell in love with this spring watching Off the Map.   I predict great things for both girls.

The setting was simple, but deceptively so.  In a drawing room at the country estate of the Coverlys, bits and pieces of the past slowly begin to occupy the same space—a turtle, an apple, a computer, and even a journal, with pages being turned simultaneously in both time periods with a synchronicity that was truly amazing.  I don’t want to spoil the story, because that’s half the fun.   But believe me when I tell you that the ending is so bittersweet and beautiful that if even if you aren’t one to cry easily, you’ll be tempted.